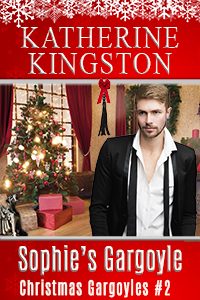 *NOTE* This is a rewritten version of a short story included in the Naughty Literati anthologies. It’s been revised and expanded to novella length.

Sophie Scranton, owner of a Washington, DC gift shop, escaped an abusive relationship in the past, so when she rescues a woman from the cold rain, she recognizes what the black eye and bruises on the woman’s face mean. Sophie has doubts about the strange man who steps in to help her get the woman away to a shelter and protect her from harassment by the woman’s husband, but she’s also very attracted to him. As he continues to protect her and her shop, she comes to admire him and enjoy his dominating ways. He makes sense when he explains the difference between a bully and a dominant man. But then he also claims to be a gargoyle who can take on human form for only a limited time, and she fears he’s delusional. But she’s falling in love with him anyway.

Sophie Scranton set down the string of Christmas lights and glanced out the shop’s main window. Lightning lit the late afternoon sky while thunder shook the glass. A woman stood on the corner, silent and bedraggled, in the pouring rain. In the dimness that followed the flash, Sophie could still see the woman, though less clearly. Odd that she wasn’t running for shelter, but the slender figure just waited. A lost tourist perhaps? Washington, D.C. had tourists year-round, and the gift shop was close enough to the cathedral to get a good bit of that traffic Most of them did have sense enough to get out of the rain, however, especially in early December, with the temperature at just under forty degrees.

She reorganized the Christmas gift and decorative items in the window, placing the Santa and his reindeer-led sleigh a bit farther back, moving up one of her favorites, an adorably homely gargoyle in a red stocking cap.

Another flash lit up the area. Across the street, in the shelter of a doorway, a second figure lurked. A large man, wearing a thick sweatshirt with the hood pulled up and concealing his features, but the angle of his head showed where his interest focused. He, too, watched the woman on the corner. She wasn’t looking back at him. Her gaze seemed fixed toward the opposite direction. Still, there was something disturbing about the man. And compelling, too, which sounded all sorts of alarms in Sophie’s brain.

Battered by wind and rain, the woman remained standing on the open corner, shoulders sagging, long hair unbound and blowing around her face. Sophie couldn’t take it. “I’ll be right back,” she said to her associate, Jean, as she turned from the window. She tossed on her coat and grabbed an umbrella from under the counter, opening it as she headed for the door.

Jean swiveled to face her. “Wait. What—?

She ignored Jean’s query and her wide-eyed astonishment as she went out into the rain. A freezing blast of wind pushed against her as she struggled to get to the corner. The woman still stood there, though she turned a startled and terrified look her way when Sophie put a hand on her arm. Fortunately the terror faded when she saw Sophie, but the look of resignation, almost despair, that replaced it was heart-breaking.

“You’ll catch your death out here,” Sophie said. “My shop’s right over there. Please come in.”

The woman didn’t answer, but she didn’t resist when Sophie led her to the door. Jean met them there and held it open. As Sophie turned to close it behind her, she noticed the man still watched from the doorway opposite. She couldn’t see his eyes in the shadow, but she somehow felt the weight of his stare, now focused on her. To her surprise, he nodded acknowledgment, but made no other move.

She didn’t have time to puzzle over it. Jean had already nudged the shivering woman into the one armchair, retrieved a couple of towels, and was trying to dry her off. Sophie hung her coat and dropped the umbrella in a corner. Jean had put on the kettle to heat water. Sophie made tea and brought the cup over.

“Drink,” she told the soaked woman, who still seemed in shock. The woman took it from her and sipped carefully. A bit of tension seeped from her and she wrapped her hands around the cup, savoring the warmth.

“Eleanor. Ella, most people call me.” Her teeth chattered on the answer. She looked at them and pushed hanks of long, sopping brown hair off her face.

Sophie sucked in a harsh breath. “Who did that?” A swollen knot stood out on the woman’s cheek; another disfigured her sharp jaw; and a dark ring circled her left eye.

The woman leaned forward, hanging her head, letting wet hair fall back over her face. She wore a plain, gold band on her left hand.

“Do you have children?”

This time she shook her head in the negative.

That was a relief. “I know a place you can go where you’ll be safe,” Sophie told her. “I can call right now and get you in.”

Ella shook her head again. “He’s… You have no idea.”

“You have?” The woman jerked her head back to stare at Sophie.

“It’s not my best memory. But yes. He wasn’t my husband, but that didn’t actually make much difference. We’d talked about getting married. He’d always had a temper, but I didn’t think too much of it until he started pushing me around and then hitting me. Unfortunately, we’d already moved in together. He was always so apologetic, but at the same time, he convinced me it was all my fault. Now I can’t believe I let him get away with that shit.”

“How did…?” She shook her head and looked down again.

“How did I get out of it? With a lot of help. I was fortunate that my aunt was still living then. I went to her one day when I was all beat up and scared that I might die from it, and she took me in. Got me involved with a group that helped me realize I was worth more than just a target for an abuser, and while it wasn’t my fault that he was punching me, it was my fault that I continued to let him. That I kept accepting his bad-mouthing and his apologies and the promises he never kept. It took a while before I believed it, but now I can see how stupid I was to let him convince me I was ignorant and useless and deserved the way he treated me.”

Ella shivered violently. Sophie took the nearly empty teacup from her and set it aside. “I can put you in touch with the people who helped me. All I need to do is make a phone call and they’ll help. I promise they can help.”

The front door of the shop opened and closed rapidly. Sophie jumped and turned that way. The man she’d seen in the doorway across the street stood there, ignoring the rain water dripping off his clothes.

“A man is looking for her.” He had a deep, raspy voice. The hood still shadowed his features; along with his size and something about his tense stance, it made him seem sinister and menacing. And, yet, attractive as well. Blast. Surely she’d gotten beyond that now.

“He doesn’t know she’s in here.” The stranger glanced around the shop, stopping for a moment to study Sophie’s face. He shook off the distraction. “Get her out of sight before he walks by and sees her.”

Sophie turned to Ella. “Is that your husband?” she asked.

The woman gaped at the newcomer. “No. I have no idea who he is. I’ve never seen him before.”

“Who are you?” Sophie demanded of the man.

“Later.” The word was sharp with impatience. “Get her out of sight now. Make the place look normal. I’ll answer questions later.” He glanced out the window, up the street. “He’s headed this way. Hurry.”