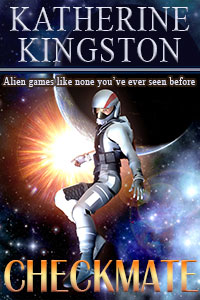 Five Angels! “In Checkmate, we are treated to a trip down memory lane to a time that Raje and Devonne had to work together to survive the ten tasks the Sangari gave them in order to stay alive.

This was an amazing start. The ingeniousness of the tasks and how they needed to complete them was fabulous. I really enjoyed the interaction between Raje and Devonne. This was a well-written story and a continuation of Ms. Kingston’s line of great releases.” –Serena, Fallen Angels Reviews * Read Full Review *

Five Stars! “Checkmate by Katherine Kingston is a quirky little futuristic romance with oodles of appeal. A strong no-nonsense heroine and a good guy disguised as the bad boy hero mix among some wacky interplanetary laws to create a story that will have you glued to the pages. The supporting characters are fantastic in that they add to the hilarity and lend depth to Dev and Raje without distracting one from the meat of the story. Well done, Ms. Kingston.” — Keely Skillman, eCataRomance.com

“Captain, we have a problem!”

Devonne sighed. Without taking her eyes or attention from the viewscreen port, she asked the Personal Care Droid, “What now?”

“A seam has come loose in your only remaining dress uniform.” The PCD made an annoying huffy sound before adding, “And the refresher just tore a button off it.”

Devonne made a mental note to get the programming adjusted to remove that huffing noise from the droid’s speech system. “Fix it.”

“Captain, I beg your attention. Those seams have been-”

“Captain?” Another voice cut through the droid’s complaint. The combination of surprise, alarm and doubt in the single word warned Devonne that fate was about to throw a monkey wrench into their carefully worked out plans.

Ignoring the PCD, which continued to babble on about clothes, she turned to face her first mate. Reed stared at a screen in front of him. “What have you got?” she asked.

He frowned and tugged on his earlobe. “If I didn’t… I swear it looks like someone had the same idea as us and got to the Denogrenian ship first.”

“What?” She spoke so loudly it startled the two other crewmembers in the room into looking up from their panels.

Reed pulled the direct link from his face and disconnected it from the panel. Devonne repeated her order to magnify the display.

Sure enough, another smaller blip clearly approached the large blip that represented their target. A wavery yellow line shot out between them.

“Damnation!” Devonne clenched her fists and clamped her lips shut. She wanted to scream her frustration as she watched the evidence of a tractor beam hauling her prize toward a rival. When she reclaimed some measure of control, she said, “Identify secondary target.” She already knew but needed to hear it confirmed anyway.

“What the hell is he doing here? Damn. Shit! No official standing, indeed.”

“Captain?” SueBelle, the newest member of the crew, looked up at her, eyebrows raised.

“Reginald Jameson Jernigan. Commonly known as Raje. Or Prince Reginald. The son of a bitch.”

Reed spoke at the same time. “What’s he doing?”

“Beating us to the prize.” Devonne’s fists clenched again. “But why? I thought he was out of the game. Unless he had another fight with his uncle. But even then…”

She needed this cargo. Her exiled clan, now more than five hundred strong, was hidden in an obscure corner of an even more obscure planet and rapidly outgrowing their hiding place. They needed a bargaining chip to finally gain a place where they could settle permanently. Interstellar piracy had a limited lifespan and she neared the end of it. This was her grand finale, her swan song, the move that would end her life of crime and let her retire in peace. She wasn’t about to give it up to an arrogant jerk who viewed life as a game and stolen cargoes as his ticket to personal wealth and power.

“I’m not going to let this go. CC, can you calculate the combined mass of both those ships?”

Reed threw her an incredulous look. “You can’t be thinking of trying to snag both of them?”

“You’re going to play chicken with him?”

The computer came back and gave an answer. The number wasn’t as low as she’d hoped, but it might still be possible.

“That’s why,” Reed said. “I know all the reasons you don’t want to lose this one, but still… Why not wait until he releases…never mind. He can still run faster, can’t he?”

“CC, how much acceleration can we generate if we divert every bit of power to the engines?”

“Everything but critical systems.”

The rest of her crew, SueBelle, Reed and Nathan, looked at her as though they feared she’d lost a critical neural system or two herself.

The computer’s answer came a few seconds later and gave her pause. It might be enough. If… “How long can we maintain that level and still have enough fuel to get back to Esketan Station?”

“With present fuel levels, a maximum of thirty-six hours.”

“Captain, you can’t mean to try to hold them both!” Reed challenged.

She gave him her sharpest, sternest look. “I don’t mean to try. I’m going to do it. Reed, take us in just the way we’d planned. Nathan, prepare to activate tractor beam as soon as we decloak. SueBelle, fine-tune position coordinates to give us maximum grapple on both ships.”

They trusted her enough to follow her commands. She’d taken a few strange gambles before and they’d paid off. She hoped she could do it again one last time.

They’d just decloaked and were preparing to activate the tractor beam when the computer announced, “Incoming message. Marked ‘Urgent’.”

“Source?” SueBelle asked, without looking at the display or lifting her hands from the controls.

They all looked up at that.

A man’s face appeared on the screen at the side of the cockpit. Without greeting or any other polite pleasantries, he said, “Devonne, what the hell do you think you’re doing?”

She stared at the figure on-screen, looking for changes wrought by the six months since she’d last seen him. She didn’t find any. His hair was still as black, his face just as strongly chiseled, his mouth hard and sensual, cheekbones high and sharp. His eyes were still that strange light yellow-green color. She expected anger, but instead his expression looked more amused.

“Nearly six months,” he snapped back. “And you don’t appear to have developed any more sense in the interim.”

“You always did say the nicest things to me.”

“You can’t guess? You used to be smarter than that, Raje. And, by the way, why are you here? I thought you’d gone respectable, Your Highness.”

“Which part of ‘Royal Denogrenian Treasure’ don’t you understand?”

He closed his eyes for a moment and shook his head. “The part where you think you can take it away by holding both the Denogrenian ship and mine in trac.”

“Thirty hours. I can hold it for thirty hours. About how long it will take a fleet of Denogrenian warships to get here.”

He looked startled. “Then we both go down.”

“Right. Want to talk about it? The thing is, I have nothing left to lose, and you do.”

“Ridiculous. If you don’t care about your own life and freedom, what about your crew?”

He had her there and they both knew it.

Amazingly it was SueBelle who spoke up first. “We’re with Captain Devonne all the way.” Reed and Nathan nodded agreement.

“Devonne, this is ridiculous,” he said. “Will you meet me to talk about it?”

His black eyebrows rose. “I’m open to all sorts of…communication. But whatever you want.”

She ignored the suggestion in the words. At least she tried to ignore it. But his deep, sexy voice slipped past all her defenses and worked its way into her blood, warming it, making her too aware of him. Worse yet, he was doing it deliberately, putting in that low gravelly rumble, because he knew what it did to her. Her body remembered what the rest of her wanted to forget. The familiar low pressure began to gather. Damn it.

“I want the Denogrenian ship.” It came out a bit sharper than she intended, betraying the emotions roiling through her.

“But I’m getting to it last. And while you may have it, you’re stuck here until I decide to let go.”

“But you are as well,” he pointed out. “Stalemate, Devonne. Let’s talk about it.”

“Permission to board extended, Your Highness,” she said. “But come alone.”

“Of course. I figured you’d want me all to yourself.”

“Don’t flatter yourself,” she growled, annoyed because her heart was thumping too hard and her hands were shaking.

“I’ll be there in twenty minutes.” He signed off.

“Wowza.” SueBelle’s stare mixed admiration with envy. “If you don’t want to keep him, can I have him? All that sexy good-looking man and he’s a prince to boot?”

“You don’t want him. He’s an arrogant jerk.”

The PCD droid came over and said, “Captain, you must dress appropriately to welcome the Gambrian First Heir and commander of Fool’s Quest. Please come and change. I’ll have the seam repaired quickly.”

Devonne sighed. The droid was right . “Go fix the seam. I’ll be there in a moment.”

She waited a moment to be sure no hitches would arise, but it appeared the trac hold was stable. She slowly made her way back to her cabin, unable to contain the memories Raje brought.