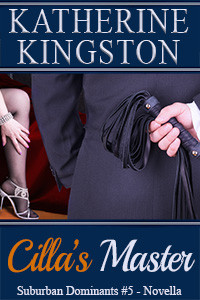 Original Release date: May 7, 2010
Scroll Down for an excerpt

Cilla wants a family and a safer relationship with a man who’ll be her partner and lover, not a full-time Master. She challenges Charles to prove to her that his love transcends their play. Can he leave the Master at the club and give Cilla what she needs?

Read the start of the first chapter here…

“You have a safe word,” he reminded her, holding her gaze. “Code Red. Don’t forget it.”

His smile—brief but sweet, and so rare—sent tingly little curls of heat rushing through her. Her blood fizzed with the joy of it and a fire ignited in her gut. He’d barely even touched her yet.

“Don’t be afraid to use it.” He said that softly, so only the two of them would hear.  “I know this is pushing you beyond what you’re used to, so stop it if you’re uncomfortable with it. It’ll be a good teaching opportunity for how a Master should react when his sub uses the safe word.”

“Thank you, Master,” she said.

He nodded. “Good.” More loudly he added, “But now there is the matter of your disobedience earlier when you looked me in the face without permission.”

She loved saying that to him. She could sound very submissive when she wanted to. And maybe that was the heart of the problem. Edward had never been able to see beyond it. He bought the part of her that was a submissive without understanding it wasn’t the whole story of who she was. Charles was smarter, but she wondered if he really wanted more than that either.

Regret stabbed through her as he turned her to face the rear of the stage area, where an X-shaped wooden cross had cuffs and chains hanging at different heights. His hands were warm and supportive even when he fastened the bands around her wrists and raised her arms until they were over her head. She grabbed the pegs near the tops of the beams. He spread her legs wider and attached the padded cuffs to her ankles as well. He tested the tightness to be sure none of the straps bound her too closely before he stepped back. From this angle she couldn’t see the crowd without stretching her neck. Charles was damn near the perfect Master. Edward had been good, but Charles was better, at least with her, somehow more in tune with what she wanted and needed. She sighed and tried to turn off her thoughts, to make herself relax into what was coming.

The whizzing sound interrupted her unhappy musing. As usual he took a few practice swings. A light to medium flogger, she guessed from the sound as the tails cut through the air. Her bottom would know better in moments. He swung again and this time it connected with her rear end. Not hard. Just enough to rouse a slight burn. One of the lighter floggers then. That would make sense if these were mostly beginners. A second stroke landed across her bottom. It had just the right heft, created just the right amount of sizzle. Charles knew it worked best to start slowly, warming her up with a few lighter smacks that would blaze a trail for the harder ones to come.

The heat of them curled into her sweetly, making her bottom come alive with the prickly tingle. A few strokes later, the heat grew into fire and her rear blazed with the burning accumulation of lashes.  As usual, though, the sting burrowed down into her, spreading its glorious zing to every limb and extremity before settling in her core. Her pussy swelled and grew moist.  Pulsing need throbbed there.  She tried to separate her mind from it. Experience said it would be a while before she got the fulfillment she craved. It would come. She trusted Charles for that. But she’d have to earn it. She trusted him for that also.

The flogger struck the backs of her thighs repeatedly, almost softly the first few times, creating a tingly warmth that spread and prickled more deeply with each lash.

“You want to make sure it builds,” Charles explained to his audience. “Start light and gradually get harder. The sub will be able to take a lot more that way. And she’ll enjoy it more. So will you.”

He suited his actions to his word, making each stroke just a shade harder than the previous as he whipped the flogger across her bottom cheeks.

He addressed the onlookers at the same time. “You can keep the strokes clustered in the same spot or spread them out, but be careful not to lay too many on very sensitive places at one time. The insides of the thighs are particularly tender,” he said. The flogger splayed its fire along the inner part of her right thigh. Cilla yelped, then moaned as the sting dug deep and sent a jagged streak of pleasure straight to her pussy.

“Of course, you can go higher for the most sensitive place, but I don’t advise it until you’ve had a lot more practice. It’s very tricky to hit there without doing it too hard and ruining the scene. However, there’s another sensitive place you can use.”

The flogger whizzed and this time the tails caught her on the spot right where her bottom and thighs met. It made her jump and squeal.

“Right there at the joint is very tender.”

He continued to lecture as he rained blows on her, lashes that stung in the usual thrilling, satisfying way. Even as she responded to the strokes, Cilla wondered why she got aroused by something most people found incomprehensible if not downright strange. Why did she welcome pain and find pleasure in it? But it was only certain kinds of pain. She hated a toothache just as much as anyone else. And the pain had to be administered in the right way, in the right circumstances.

Charles was the best at it she’d ever known, though she’d tried to be sure Edward had never realized that. He’d had his own virtues.

When the burn from the flogger grew to a tide of sensation that drove her close to the edge of an orgasm, he stopped. To his audience he said, “You have to pay close attention to your sub’s state. I can see that Cilla is close to coming, so it’s time to change things up a bit.”

She heard him move across the stage area and then return. She couldn’t guess what he’d brought back until she felt the soft strokes of a feather over the burning patches of skin he’d lashed. The contrast made her hotter and needier than ever as the tiny prickles of the quill’s ends roused shivery waves of desire.

The feather ran up the inside of her thigh to her slit and back down the other, then up again. She began to wriggle as the sensation grew almost beyond bearing. Again she was swelling, throbbing, her breath heaving in and out on harsh pants. When she was on the verge of exploding, he stopped.