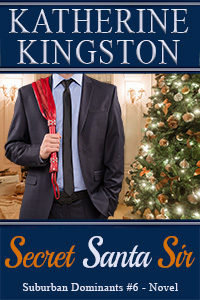 Scroll down to read an excerpt

When Maggie gets a note from a very unofficial Secret Santa during the office’s holiday gift exchange, she’s surprised to be tempted by it. This Secret Santa offers to help fulfill her wilder sexual fantasies, those fantasies she’s never admitted to anyone else. Normally the very professional, uptight Maggie wouldn’t consider doing anything so risky. She wants a husband and family, but she also has kinky sexual fantasies and no man has ever moved her.

Maggie agrees to Santa’s proposal, and her first few anonymous encounters with him are a revelation, showing her levels of sensuality she’s never experienced before. But when she meets the man behind the gifts and the glorious kisses, her life gets seriously complicated.

As Maggie begins to fall in love with him, she faces two choices—longing for husband and family, and continuing a relationship that fulfills her in ways she never believed possible.

Staring mindlessly at a television news show while she ate dinner helped convince her, if nothing had before, that she needed to do something different, to make some kind of change in her life. This was the first day of the new Maggie Marino. Nonetheless, she still nearly had a panic attack on the drive to the hotel, which was smack in the middle of downtown Baltimore.

She got to the hotel and tried not to glance nervously at the elderly couple that shared the elevator car. Fortunately they stayed on when she got off at the third floor. After scanning the hall in either direction and seeing no one else, she stopped in front of the designated door, put on the blindfold and wrapped the scarf over it as instructed, until even hints of light and dark were blotted out. She rapped on the door, hoping the knock would be answered quickly. Her nerves were jangling and her stomach danced an electric slide while she waited.

The door rattled and clicked. Air moved past her then a hand rested on her arm and guided her inside. “I thought you might still chicken out,” a masculine voice said from close by. It had an odd, muffled tone, as though he spoke through cloth or something. Trying to disguise his voice? Almost she thought she recognized it, but not quite. Evan, Jerry, Sean—or someone else? She couldn’t tell for sure.

“Come in and sit down.” The hand on her arm guided her to a padded armchair. “Would you like a drink? Water, beer, wine, something harder?”

“Water, please. Maybe wine in a bit,” she answered.

Ice clinked and liquid poured, then a cool glass was put into her hand. “There’s a table on your right where you can set it down.”

“We’re going to take this slow,” her Secret Admirer said. “I want to ask you some questions. I expect answers, truthful ones. There will be a punishment if I find out you lied to me. Do you understand?”

She drew in a sharp breath on the word “punishment” but hoped he hadn’t seen or heard it. Not likely. She had the impression he was watching her reactions carefully, and she’d already betrayed something to him. “Yes, I understand.”

“Good. You are single, right?”

“Not in a romantic relationship with anyone?”

“Not at the moment,” she admitted.

“How many men have you had sex with?”

She had to think about that for a moment. “Four.”

“Have you ever had an orgasm with them?”

She hesitated. “Yes. I think.”

He paused before he said, “If you only think you did, it wasn’t much of an orgasm.”

Maggie had no answer for that. He went on asking question after question about her dating history, the age when she’d first dated—sixteen—the age when she’d had her first sexual encounter—twenty —etc. He moved around to the back of her chair as he asked, “Have you ever masturbated?”

It startled her. His fingers wove into her hair, holding her down and caressing the strands to soothe her again. When she remained quiet, he said, “Answer me. Honestly.”

“Good.” Something in his voice changed. Not the muffled part of it, that stayed the same, but the timbre deepened, grew richer, rougher, more sensual. “Has any man ever done this to you?”

He ran the tip of a finger gently and ever so slowly from right in front of her ear down and back to her throat, then made thrilling circles below her ear. She sucked in a sharp breath at the tingles that roused and spread from the site of the contact. The other fingers on his hand brushed across the bottom of her jaw and her throat. Such a slight and simple act, barely a caress, but the world rocked. No one had ever touched her in such a careful but blatantly sensual way. A shiver raced up and down her spine.

“You haven’t answered me.” The deep richness of the tone remained, overlaid now with sternness and mastery.

Her head felt too light and separated from the rest of her. “Yes. I mean no. What was the question again?”

He laughed. “Has any man ever touched you like this before?”

She could barely find breath enough to answer. “No.”

“Yes.” Tension gathered in her core as the electric tingles continued to zip across her skin, scattering from where he continued to explore her neck.