This post is part of the Holiday Gifts of Love blog hop. Scroll down to the end of information about prizes available and other participants.

I love Christmas, almost everything about it–except shopping.  Actually, it’s not the shopping I mind so much as it is the traffic jams in the parking lots, fighting the crowds, and waiting forever in line to check out. I actually love buying gifts for people. I’m not the greatest at choosing those “perfect gifts” but I like trying, and I think I do okay at it. At least, nobody’s handed back any of my gifts, yet. If some things have been quietly “regifted,” no one’s told me about it, so it didn’t happen.

And then there’s the baking.  In an earlier post, I shared how I cook my pumpkin and turn it into pumpkin bread, pumpkin muffins and pumpkin cookies. I usually freeze some of those goodies so we can have them at Christmas too.

But it’s not just pumpkin. In fact, I have a number of cookie recipes that my family loves—chocolate chips, sugar cookies, molasses cookies, cinnamon cookies and orange cookies. If any of those are missing, there will be howls of outrage from some quarter. I usually start baking in November and tuck batches away in a back corner of the freezer.

I try to do one new cookie recipe each year. Mostly they turn out pretty good, but not special enough to dislodge any of the top five. Sometimes, they’re pretty good and they get added to the alternate list.  I can only remember one true disaster – the fruitcake cookies. Enough said. I can’t even remember why I thought those might be a good idea.

I like decorating, too, and I probably kind of overdo it. I think it’s a reaction thing. In general my style of decorating is pretty simple. I don’t like clutter and I hate dusting things. Christmas is the exception. I cover every available surface with tinsel, ornaments, candles, doo-dads, etc.

So what don’t I love (aside from the traffic jams, crowds, and long lines)?

Christmas in October, for one. I hate going into a store in October and finding them already moving out the Halloween stuff and moving in Christmas, two weeks before Halloween!  And it bugs me that Christmas ends on December 26th. Traditionally the season goes to January 6th, the feast of Epiphany, the commemoration of the arrival of the Magi. In some places that’s the day of the gift exchange, and historically Christmas was celebrated primarily from Dec. 25 to January 6 – the traditional twelve days. I hate it when everyone takes all the decorations down on Boxing Day.

Then there’s the music. Don’t get me wrong; I really like most Christmas music. I just don’t like hearing “White Christmas” 25 times in a row, as recently happened when I was in a restaurant with my daughter, where they had one of those singing figurines set up and running. And running. And running. I wondered how the staff felt about it. It drove me nuts in the hour we were there. I’ll bet the staff wanted to take a sledgehammer to it and beat it to death.

But, I’m not really a Scrooge. I love Christmas enough that I’ve written three specifically Christmas stories: The Last Candle (in the print anthology, Holiday Heat), Gargoyle’s Christmas, and my most recent release, Secret Santa Sir. One of my medieval historical novels, Binding Passion, takes place partly around Christmas as well.

So: What do you like most about Christmas? Dislike most?

Now for the promo part…

This is an offer to help you discover the possibilities of your wilder fantasies. You’re not obliged to accept it, and even if you do, you can call a halt at any time. This is for fun and games. I promise you won’t get hurt any more than you actually want.

When Maggie Marino gets a note from a very unofficial Secret Santa during the office gift exchange, she’s surprised to be tempted by it. She’s at a crossroads in her life. She wants a husband and family, but she also has kinky sexual fantasies and none of the nice guys she’s dated so far have moved her. Blindfolded she meets her Secret Santa and the encounter teaches her what sexual desire is all about. But when she meets the man behind the gifts, her life gets seriously complicated. As she begins to fall in love with him, she’s faced with having to make a decision between her longing for husband and family and a relationship that fulfills her in ways she never believed possible.

One commenter here will win their choice of ebook from all of my books available in ebook form other than the current release, Secret Santa Sir..

There ae also a number of prizes available as part of the hop: 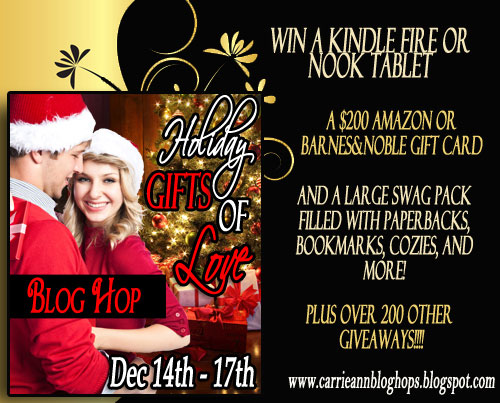 More info on the blog hop available at: http://carrieannbloghops.blogspot.com/