Those of you who follow me know that last year I requested back rights to all of my books at Ellora’s Cave and have had most of them reverted to me.  I plan to begin releasing newly edited versions, beginning with the loosely related Suburban Dominants series. It begins with the short story (15,000 words) Dominant Boys of Summer, followed by full-length novel Nick’s Lady, short story Charming the Masters, full-length novel Kyle’s Bargain, and short novel Cilla’s Master. 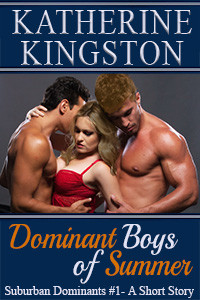