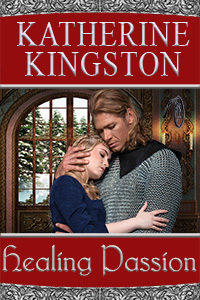 The last in the four-book series of Passions novels is now available.  Healing Passion released yesterday!

Tag Line: The attraction between Lady Juliana and the king’s messenger, Sir Thomas Carlwick, is powerful, but he may not want her once he learns her devastating secret.

Short Blurb The king has charged Sir Thomas Carlwick with learning what became of Baron Groswick. No one has seen or heard from the man for more than a year. Thomas’ inquiries have so far turned up no sign of the Baron. When he goes to Groswick Keep, he gets a mixed reception. Young, lovely Lady Juliana welcomes him graciously, but that evening someone tries to kill him by firing a crossbow at him. Juliana apologizes and tends his injury. She also tells him she has no idea what happened to her husband, but she’s beginning to accept that he’s dead.

Thomas is attracted to Juliana, finding in her everything he’s wanted in a woman. Despite a past that was nearly destroyed by a woman’s lies, Thomas is ready to settle down again, and he believes Juliana is exactly what he’s looking for. As soon as he can prove Baron Groswick is dead, Juliana will be free to marry him.

But he may not want her anymore when he learns what really happened to Baron Groswick.