Several readers have asked me about the gorgeous set of new covers for my Passions series. I’m so much happier with these covers than any of the ones they ever had in their previous incarnations.

I worked extensively with the cover designer to get exactly the look I wanted. We had several discussions over the “feel” of the design. She was incredibly patient, trying out various filigree border designs for the silver pieces at the top and bottom until we found just the right one. And then she tried out many shades of red to find the one that worked for me.

We agreed that my name should be in the same font and orientation she used on my Suburban Dominants series and the positioning of both the name and title would correlate. The font for the title though needed to look more historical, so she found one that had a very old English look.

That was the easy part. Finding the right images for the covers was a challenge. I must have looked at a gazillion stock photos to find just the ones I wanted. It isn’t easy to find stock photos of people in Medieval garb that don’t look too ridiculously fake, awkwardly posed or painfully inappropriate.

I went back and forth with the designer because not all of the pictures would work in the context of a cover. Some of them couldn’t be cropped to fit in the space, the model’s poses were wrong, or the colors clashed with the background. I didn’t like a lot of the models she suggested – they just didn’t seem right. We finally found three couples that worked well for the three novels and decided to go with just the armor and sword for the short story that leads off the series.

There were compromises because of the limited number of models I found acceptable. The cover model of the knight on Ruling Passion has short blond hair, while Lord Jeoffrey’s hair is long. And the model on the cover of Binding Passion doesn’t have Philip’s curly hair, though we did find one with his neatly clipped beard.

Nonetheless, I’m more than happy with the way these covers came out. 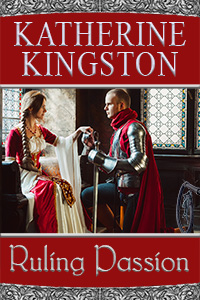