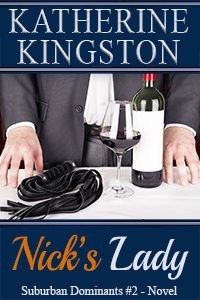 Nick Tysinger is the most attractive man she’s ever met, and learning he’s a Dominant makes him even more exciting. Her experience with Cal has made her wary, but in exploring their needs together, Andrea and Nick find they’re compatible in more ways than just their kinky leanings.

Still, there are issues to work out between them. They argue over Nick’s estrangement from his family. Nick worries how Andrea will react when she learns he sometimes shares in a ménage with his best friend and his best friend’s wife. And Cal isn’t ready to give up his imaginary claim on Andrea yet.